A Safe Landing for Helicopter Parents 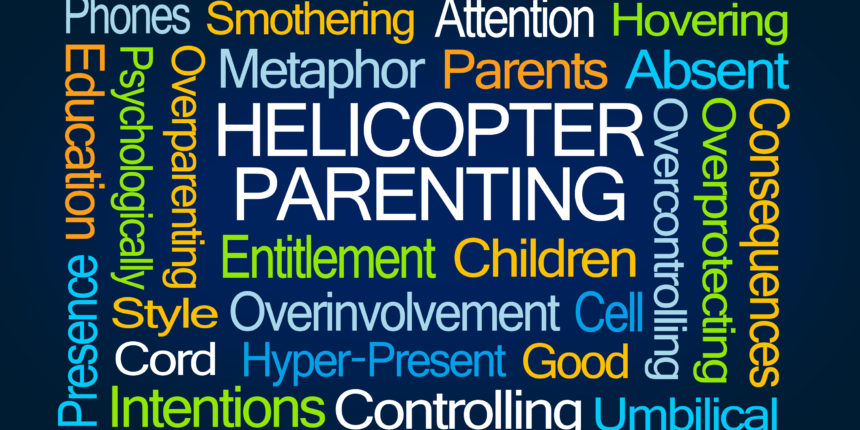 Every parent wants what’s best for their children. We want them to do well in school, make friends, be happy and healthy, and be kind to others. But how much responsibility do we bear as parents in helping them achieve these goals? A helicopter parent is someone who hovers over their child. They wish to control or curate their child’s academic, extracurricular, and family experiences and feel a great deal of responsibility for their child’s achievement or failures.   This “overprotection” doesn’t only include protecting from physical harm, but also protection from disappointment and failure as well. When well-known psychoanalyst Donald Winnicott, talked about the concept of the ‘good enough parent’, he was hoping to help parents move on from an inner critical parenting voice and clarify that parent and child struggles are essential for the growth process. Helping toddlers, school age kids, and teens manage frustration is important for building resilient adults.

Helicopter parenting has its own developmental trajectory. During infancy, worried parents, typically first time parents who have not raised other children, become preoccupied with physical health, reading the right books, and attending to infant feeding, sleeping, and diapering habits. During the toddler years, a helicopter parent wants to be physically present as much as possible, providing more instruction than the chance to learn and play independently by trial and error. In elementary school, helicopter parents may seek certain teachers or coaches, over extend themselves in assisting their kids academically or in extracurricular settings, and may be reluctant to allow their children to struggle through lessons in natural consequences. During adolescence, helicopter parents become preoccupied with academic achievement and the college application/acceptance process. Some go as far as doing their child’s homework and write the essay for the college application.

Helicopter Parenting Leads to Problems Later in Life
While helicopter parents have good intentions, for every parenting decision there are risks, benefits, and alternatives. A child who grows up in this way may not experience failure or learn that there are consequences to their actions, and they may lack the confidence to make their own decisions. As a result, they end up lacking the skills needed to navigate the “real” world. Kids are being pushed academically, but are let off the hook when it comes to learning necessary life skills like coping with failure.

This parenting style has been on the increase since 2000. You might think that this is due to today’s world being more dangerous that it was for previous generations, however that is a misconception. Despite the tragic stories that make the news headlines these days, statistics show that the world actually is safer for children in many respects.

Source: Crimes Against Children Research Center at the University of New Hampshire

Mental Health Implications
Although children and teens may live in a statistically safer world, more kids are being diagnosed with depression and anxiety at a younger age. There aren’t studies that prove helicopter parenting causes mental health problems, but there are correlations. We know that high expectations cause a significant amount of stress and stress can be a contributing factor for the onset of depression and anxiety in children and adolescents. There is a known relationship between exposure to chronic physiological stress in the body, most notably elevated cortisol levels and its impact on the hypothalamic pituitary axis. This means that stress actually impacts physiology. Therefore, the stress that children feel as a result of this parenting style may lead to mental health problems. This is particularly true when the helicopter parenting style is at odds with the temperament and cognitive style of the child.

Too Much Structure?
Routines are good for kids. They feel more secure when they know what to expect, but how much structure is too much? Years ago when children were young, they played outside with friends, played with toys and used their imagination for make-believe. Today, many kids participate in structured activities from the time they are very young. From toddler classes to dance and sports, today’s children are more involved in activities than ever before, leaving little downtime to just be a kid. One study found that kids with a less structured life are better able to set their own goals and take the steps needed to achieve them.

As children grow up and enter high school, the academic expectations paired with a packed schedule of activities result in kids and parents who are stressed more of the time than not. Should a 17-year-old feel like every test score, college acceptance letter or sports win will make or break their future? In the minds of high-achieving students, one mistake means their whole future is doomed which can lead to feeling hopeless, a symptom of depression.

What Should Parents Do?
Like everything else, moderation is key. Be active participants in your child’s life and guide them through challenging times, but don’t do everything for them. Let them work hard, take on age-appropriate responsibilities and help them cope with failures. We all learn more from failure than success! The best thing you can do is give your child the skills they need to navigate adulthood. Let them learn valuable lessons when the stakes are low so they have the ability to make better decisions when the stakes are higher down the road.