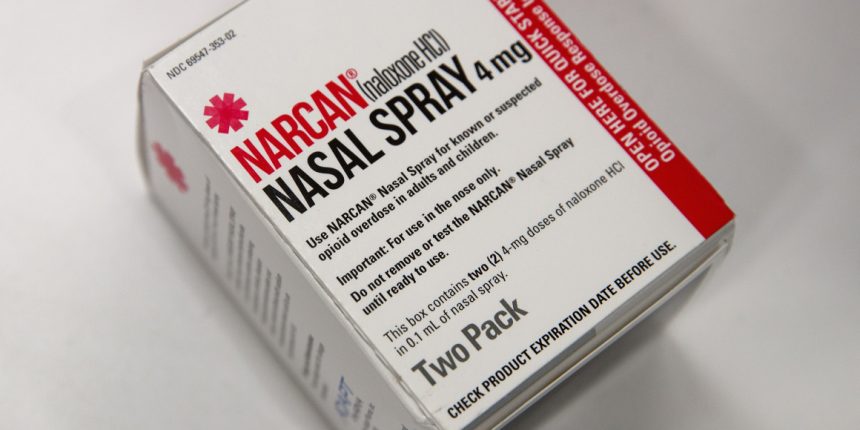 Opioid addiction has gone beyond the crisis stage to become an epidemic, and the Nutmeg State ranks in the top 10 among states with the highest rates of opioid-related overdose deaths. As part of a statewide initiative to cope with that sobering statistic, a free “Save a Life” Narcan workshop took place April 26 at the Edith Wheeler Memorial Library.

Narcan is the trademarked name for the drug compound naloxone hydrochloride, which is used to revive a person who has overdosed on opioids. While it is fast-acting, the individual must also receive prompt medical attention. Still, because a drug overdose can and often will result in death, administering Narcan can be a live-saving measure.

Through a grant from the federal Substance Abuse and Mental Health Services Administration (SAMHSA), the Save a Life program aims to train Connecticut residents in the administration of Narcan. Workshop attendees get a complimentary Narcan nasal-spray kit. Narcan is also available as an injectable medication.

Workshop leader Ellen Brezovsky LCSW, director of community relations for Silver Hill Hospital in New Canaan, noted that the opioid epidemic has affected people from every ethnic, income and age category. That owes in part to the willingness of the medical community to prescribe potentially addictive painkillers — such as oxycodone, vicodin and Percocet — for both acute and chronic conditions.

Getting hooked on these substances can happen in just a matter of weeks, and kicking them can be painful in itself.

“Addiction is a disease — it’s not just a lack of willpower or loss of control,” said Brezovsky. “And the relapse rate for opioid addiction is 90%, if a person is not on a treatment medication.”

Even after a short time using an opioid, the addicted person can experience severe withdrawal symptoms.

“People will feel very sick — and by that I mean the worst flu you’ve ever had,” said Brezovsky. “At the same time, withdrawal brings the worst anxiety symptoms a person might ever have experienced.”

To cope, opioid users just keep taking the drug. This leads to a greater tolerance — and requires them to take more of the substance just to maintain their own sense of well-being. When they can no longer acquire their supply through a prescription, they find a drug dealer — who might introduce them to other, more potent substances.

Several powerful — and even more toxic — new drugs have recently come on the scene.

Fentanyl, for example, is a synthetic painkiller that is 50 times as powerful as heroin, and drug dealers have been known to substitute it for the more common painkiller oxycodone. Carfentanil is an even more powerful derivative of the same drug that is not approved for human use: it is normally used to sedate large animals.

Four-fifths of all the world’s opioid consumption is in the United States.

“We’re not a society that deals well with pain,” said Brezovsky. “Additionally, several decades ago U.S. hospitals began focusing heavily on pain management as an indicator of positive medical outcomes. The goal was to make the patient pain-free.”

Just as nobody plans to become addicted to opioids, most don’t expect to encounter somebody who has overdosed on such a substance. But if an acquaintance, co-worker or loved one is secretly maintaining an opioid habit, it’s possible to stumble on that person in the throes of an overdose. Be on the lookout for these symptoms:

A person will be deeply unconscious and impossible to wake, even with an ordinarily uncomfortable action such as pressing the sternum. Skin will be clammy and pale. Lips and fingertips will develop a bluish cast from oxygen depletion.

The person’s breathing will be shallow and slow — and ultimately, breathing will completely stop. He or she will have a slow or erratic heartbeat as well.

“There are various myths for reviving a person who has OD’d — such as ice cubes or a cold shower — but those can make the problem worse,” Brezovsky said. “The only thing that will truly reverse an overdose is naloxone — Narcan.”

Before administering Narcan, you should alert 911. A “dose” of Narcan will wear off in 20 to 90 minutes, so it’s important that the person receive prompt medical attention at a hospital. Equally important, the person must be in a side-reclining position. It won’t work on somebody who’s sitting or standing.

The kit contains a second dose of Narcan — should the first begin to wear off before emergency responders arrive. Of note, it should be administered in the other nostril.

Narcan itself creates no pain-killing effect or “high,” so there’s no demand for it among drug users — and it has no street value. Hence, the likelihood that a supply of Narcan might be stolen from your purse or car is slim.

“Can you be too late to help?” one attendee wanted to know.

“Yes, unfortunately you can if breathing has stopped,” said Brezovsky. “When someone stops breathing, the heart will stop and that person will die.”

A supply of Narcan is neither an over-the-counter nor a prescription medication: You can purchase it any drugstore, but you will need to speak to a pharmacist when you do. It’s not cheap: A two-dose kit normally costs about $150. A more sophisticated version of the kit, which comes with a digital audio track to “walk” you through administering Narcan, runs about $450.

“For that reason, we want to get Narcan out into as many people’s hands as possible through this grant program,” said Giovanna Pisani MSW, director of the Mid-Fairfield Substance Abuse Coalition. “We are promoting this in the same way we would a CPR class, because there have been people who overdose in parking lots.”

By training more people and equipping them with a supply of Narcan, said Pisani, this initiative can trim the incidents of opioid overdose and save residents’ lives.

“Opioids started out as a crisis that we mainly saw in young people, but now we’ve seen some senior citizens have overdosed as well,” said Barbara Yeager, Monroe’s director of Community Services and a board member of ADAM (Alcohol and Drug Awareness of Monroe).

Yeager points out that preventing overdoses begins with simple measures everyone can take at home. For starters, keep all medicines in a secure location in your home, and immediately dispose of any unused or unwanted drugs.

Never toss pills and pill containers in the garbage: Addicts have been known to scour trash cans and dumpsters, searching for discarded medications. Likewise, flushing medicines will ultimately contaminate the public’s water supply. Your best alternative is to use the prescription drug “drop box” at the Monroe Police Department headquarters on Fan Hill Road.

For more information on Narcan and where to get help with substance-abuse issues, call 800-563-4086.