Why Physicians Die by Suicide: Lessons Learned From Their Families and Others Who Cared 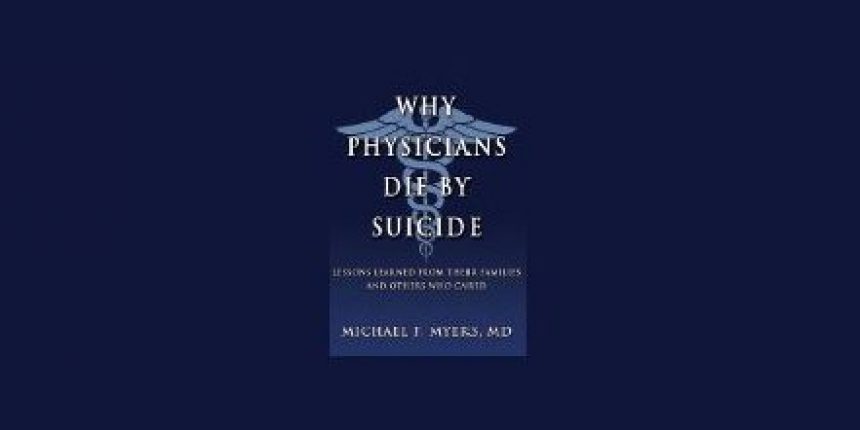 “Stigma kills,” says Dr. Michael Myers in his highly relevant book on physician suicide (p. 91). Dr. Myers could have simply compiled a collection of statistics, such as the reported number of physician suicides each year (300–400, which he presumes is lower than the actual number). He chose instead to use personal accounts from interviews of family members of physicians who completed suicide. What he produced is a poignant yet hopeful story that should serve as a wake-up call to all physicians, especially those in psychiatry.

The introduction begins with the story of Bill, a medical school classmate of Dr. Myers, who completed suicide in 1962. How the news of the suicide was handled and how Bill’s classmates were not offered a chance to grieve together foretell the manner by which the medical profession has continued to talk about suicide among its peers. Dr. Myers rightly predicts that Bill’s death would have been addressed differently if it were by car accident. It is the story of Bill that hangs over the book and appears to be part of the inspiration for the author to care for physician-patients.

The book is laid out in three parts. The first part offers a glimpse into the world of physicians and the culture of medicine in general. Most doctors are perfectionists. Many were the brightest students but are also athletes, musicians, and all-around “stars” who also happen to be funny and generous and can do no wrong. This perfectionism may conceal the underlying pain of depression. The problem is that medicine as a field has not traditionally looked kindly upon the “weakness” of its own members. Doctors are taught to work even when sick (i.e., presenteeism). Physicians are known to neglect their own health, including their mental health. It does not help that psychiatry has been marginalized in medicine, with psychiatrists mocked for not being “real doctors.” This dangerous stereotype may contribute to the resistance of physicians to seek psychiatric treatment.

Part 2 delves into the question of “why suicide” and the contradiction of physicians, who take an oath to preserve life, taking their own lives. It is painful to read accounts of how doctors in suffering commit suicide only to have their peers fail to honor their memory in death. Dr. Myers shares stories from the family of Dr. August Watanabe, who, after committing suicide, had his former colleagues tell the family to “cover this up” (p. 58). Dr. Myers goes on to talk about burnout, which he calls “an erosion of the soul” (p. 70). Burnout may in fact be covering up deeper problems of undiagnosed and untreated depression, bipolar disorder, and substance use among doctors.

This section leads to a critical discussion on how stigma, both enacted (external) and felt (internal), may lead physicians struggling with mental illness to avoid seeking help. One area that could have been covered further is how some physicians fear going into treatment, as it may lead to scrutiny from a state medical board or hospital administration. These barriers, meant to protect the public and the medical profession, may in fact be contributing further to the problem. Those doctors who do want help may delay receiving treatment, and in some cases may receive poorer care, perhaps due to the fear of the psychiatrist to challenge the physician-patient or to provide preferential (i.e., substandard) care, to the detriment of the physician-patient. Even more troubling is how physicians seeking treatment have been turned away by psychiatrists. Dr. Myers provides a helpful guide for psychiatrists managing the care of physician-patients and encourages psychiatrists to treat these patients as they would any others: with care and compassion, albeit with additional skepticism and scrutiny. Involving families and obtaining old records are critical steps. He notes that the skills and knowledge that make physicians good at their job can also make them greater suicide risks.

Part 3 offers solutions to this crisis, beginning with the restoration of humanity to medicine. Dr. Myers references support groups and education to students and residents about stress management and wellness. For physicians in practice, increasing knowledge of resources and support systems may make physicians more likely to seek treatment without fear of professional consequences or stigma. In the tragic stories from families, Dr. Myers makes clear that doctors who
completed suicide felt alone and shamed. Perhaps the most powerful force to effect change is knowing that others are suffering as well. Dr. Myers talks about brave doctors who have come forward about their own struggles with depression and suicidal thinking. It should not have to take such courage to know you are not alone. This highly important book should be a reminder that physicians need to care for one another and not turn their back on their colleagues inneed. With any hope, it will awaken a movement to break down the barriers of silence and stigma that plague our profession.